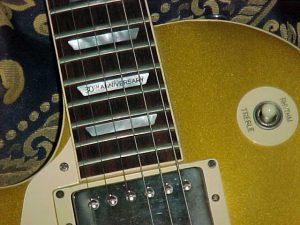 October 28, 2018 / Peter D.  /  Uncategorized
Wow, your first guitar show, this is going to be great! Rotating displays, booth babes, craft beers, and great food. I am sure Gibson, Fender and all the biggies will be there, and the swag! I bet you will need a rolling suitcase just to haul away all the free stuff. Not to mention the bands that will be playing and celebrity guitar collectors who are sure to be there……..

Sadly, the above is purely fantasy; at least as far as the East Coast vintage shows are concerned. You should try and go to a guitar show at least once for the experience. Be forewarned that as a lefty you are never going to see more than a handful of instruments.  Here is rundown on the different types of shows:

NAMM: The granddaddy of them all, way back when I was behind the counter it was a once a year show in Chicago. And there were more band instruments and home organs than guitars. NAMM is an industry only trade show, at least it started out as such. It is still industry only , but has morphed into an overcrowded celebrity spectacle. It comes in two flavors, winter and summer. The winter is always in Anaheim Ca. and is by far the larger. The summer show used to move around but now seems to have found a home in Nashville. I went to a summer show years back in Indianapolis and it was dismal. Fortunately, things have improved quite a bit since then and Nashville is a destination/vacation spot in itself. The summer show even features a non-industry day  some years so that the general public can attend. A very smart idea. If NAMM is on your bucket list then you definitely want it to be the winter show.

From Florida to Maine, there are always guitar shows of various sizes.  Most are local type affairs in second-rate halls off the beaten track. Amenities such as decent food and drink and any type of entertainment are mostly non-existent. Therefore, what you get for your 10 or 15 dollars is the ability to see many overpriced American guitars for sale. The same dealers seem to do most all the East Coast shows so that if you have seen one you have seen them all. You may be wondering with the decline of guitars in general why these things still exist at all. There are a few reasons for that. The dealers do a fair amount of trading amongst themselves at the load in load out, and the Japanese still have an insatiable appetite for American guitars. At any of the advertised shows, you will find a couple of tables with nothing to display staffed by Japanese guitar buyers. By

signing up as a vendor and paying the fees they get access to the dealers, load in, and load out. I have had wonderful discussions with Japanese buyers from Ishibashi and the like at these events. If you go on the last day, you will see those empty Japanese booths filled with guitars cases ready to be shipped back to Japan. I remember years ago at the Philly show asking the Japan guys why they never brought any Greco/Burny/Tokai guitars with them to sell, since they were coming here anyway and mostly represented big stores with a lot of Japan inventory. The one gentleman, who spoke great English, posed my query to the others in Japanese. They got a good laugh out of that and then the first gentleman pointed to the pile of guitar cases behind him and said.  “ Those guitars are just copy guitar, these are real thing “. My budding Japophile heart was crushed.  Here I had been searching out the left handed Orvilles , Greco’s ,etc on obscure Japan websites and forums , like a grail crusade, and my very heros, the Ishibashi guys themselves, dismissed them all as just so many “copyguitar”.

The shows also serve as a place for people who don’t want to deal with ebay or the classifieds to bring in their treasures and hopefully get a good price for them from the dealers.  I am sure the dealers have their share of stories about people bringing in things such as these. A note able exception to this would be the Philly show.  The Philadelphia show is held twice a year, spring and fall, in Valley Forge, Pa. It is the largest guitar show on the East Coast. If you are within a few hours drive, it is worth attending, at least once. Here you will see 1000’s of vintage guitars. The lefty pickings are not worth noting, but you will in fact see a few.

Gearfest:  And then there is Gearfest, a brilliant marketing ploy by Sweetwater Music to get people to go to Fort Wayne, Indiana in June.  Gearfest has become a major destination for guitar fans. Spread out over the sprawling Sweetwater campus it features great food, free classes and plenty of free star studded entertainment. And unlike NAMM, everything is for sale too.  So save your money, gather some friends and head out there next year. You will be glad you did.  This is Dino Velvet, saying see you until next time.